This was my first time attending Vic Challenge since moving to Melbourne. I have been going to Mission Minded since 2011 and did my MTS Apprenticeship in 2012-13 at Hunter Bible Church. I came to Melbourne after completing my Bachelor of Divinity at Moore College last year to find a church to serve in and be part of training up more gospel workers for the future.

The day at Vic Challenge was jam-packed as we heard from God’s word, prayed, sang together went to seminars, had ministry conversations and, of course, ate great food. We heard from Mikey Lynch who spoke from 2 Timothy. He showed us the beauty and the glory of the Gospel, encouraging us to be gripped by it so that we may join in suffering for the Gospel.

Across the day I had a chance to chat with a few of the delegates who are at different stages of thinking about MTS. Over morning tea I had the opportunity to chat with Jordan and one of his ministers, Ben, from Valley Presbyterian. Jordan spoke of how he had slowly moved from being a committed atheist to being a Christian through his friends who shared the gospel with him. Initially Jordan didn’t consider ministry to be for him as he is shy and introverted and felt there are people better equipped for ministry. But it was through Christians lovingly teaching him that Jordan saw that we are called to not just rest in comfort here, but that we are called to suffer for the gospel. This has led Jordan to look toward starting an apprenticeship next year at his church – to live out his conviction to teach the gospel “the gospel is the most important thing you could teach or know.”

After lunch I had the pleasure of sitting down with Rohan for a ministry conversation. Like Jordan, this was his first time attending Vic Challenge. Rohan spoke about growing up in India with Hindu family. It was through Christian friends at University who shared the Gospel with him many times that finally saw him put his trust in Christ on a Discipleship Camp – when pieces finally fit into place. While at university in India, he became more involved in the ministry on campus, in particular seeking to share the gospel with other students. More recently, Rohan moved to Melbourne to work in the Telecommunications industry. What brought Rohan along to Vic Challenge, however, is his desire to share the Gospel with others in the same way that the gospel was shared with him.

After a long day at Vic Challenge I was exhausted and refreshed all at the same time. This is something that I have felt at every MTS conference that I have been to. There is always so much to take in from the talks and so many ministry conversations to have. But in all this I am refreshed, being reminded of the surpassing greatness of the Gospel and being encouraged to continue to serve God in any way that I can. 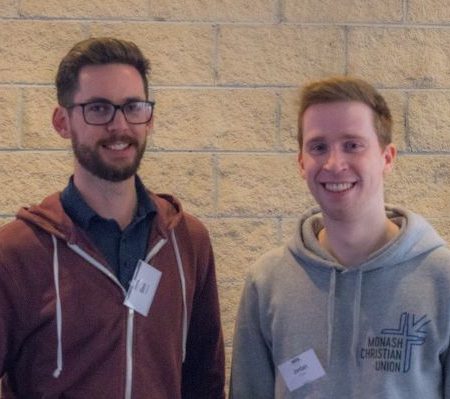