Ever since his undergraduate years ‘majoring’ in Christian Union activities, Steve Williams has had a passion for university ministry… and now he’s trained many apprentices to follow in his footsteps. 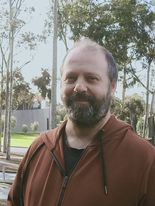 Having been raised in a Christian household, Steve Williams made his own decision to follow Christ at 14 when his brother took him to Belgrave Heights Easter Convention. He says he struggled a little at first as a Christian amongst unbelievers, especially at high school. But when he got to university, he really hit his stride.

“Being around Christians myown age was pretty exciting,” Steve recalls. “And I guess I fell a bit in love with the university ministry during my time there… I enjoyed my study, but also enjoyed doing Christian Union, which was kind of my major really while I was at university.”

He enjoyed it so much that he stretched out his degree to stay involved. And when he finally “had to graduate”, it didn’t take Steve long to find ways to keep serving God in similar ministry areas.

The starting point was a ministry apprenticeship with Gordon Cheng at Melbourne University, followed by a stint as a youth and children’s worker at a church. With his theological degree underway, Steve stayed involved with university student ministry, helping out with Christian Union and working voluntarily at Swinburne University.

Then, when a role became available with AFES at RMIT (where Steve’s wife was already working) in the late 1990s, Steve stepped in – and he’s been there ever since.

There’s no doubt Steve loves being involved in this ministry area. He reflects:

“[These] are young men and women at a stage in life where they’re making huge decisions about the course of their life, and being able to be there with them as they make those decisions, it’s a thrill really, it’s a privilege, a joy… it’s just exciting seeing lives turned around really quickly and seeing accelerated growth… That’s one of the things that’s particularly strategic about university ministry.”

Steve says one of the most rewarding things is knowing that the people he encounters in ministry may go into leadership roles themselves, whether in university ministry or in churches or in some other mission field – so what they gain from being involved with an interdenominational, evangelical ministry while at uni can have an influence on the wider Christian scene.

And this is especially important when many students initially come into campus Christian groups from diverse church backgrounds where they have not necessarily gained deep Bible knowledge.

Ups and downs and unique opportunities

Steve loves working with university students because they learn quickly and they’re open to new ideas. But there are frustrations too. It’s hard watching young people making mistakes or wasting time on other priorities.

“You’ve just got to pour a lot of love and time and attention into people before, by God’s mercy, they begin to trust you and catch the vision for gospel ministry, for reformed evangelical ministry,” Steve explains.

One very practical challenge that has been emerging in recent years – even before the pandemic – is the reduced number of hours students actually spend on campus due to flexible timetables and increased remote learning options. It’s much harder to build community these days – but Steve says this is one of the ways student ministry stands out as uniquely relational, even at times when it operates via screens:

“We persist in trying to run activities that have a relational and social dimension, as well as, obviously, a Bible teaching focus. We stand out more because very little in their life is relational at the moment… I remember last year, after we had about three months in lockdown, we had a camp… I remember the first morning together, just seeing the excitement and thrill of students being able to be with people again.”

Clearly, then, Steve is committed to student ministry, with all its ups and downs and in whatever form it needs to take. But it doesn’t end there. He is also committed to sharing his passion and knowledge, and has done so with many, many ministry apprentices over more than 20 years – so many, in fact, that he couldn’t actually put a figure on it off the top of his head during our interview. Later he checked and confirmed: around 40 apprentices have been trained during Steve’s tenure at RMIT, many of whom have come up through student ministry themselves, like he did.

Steve enjoys the extra challenges of being a trainer of apprentices.

“In a lot of ways what we do with our apprentices is an extension and an intensification of what we do with our student leaders,” Steve explains, “But with apprentices, you get more concentrated time with them. They’re also more mature, so you can push them a lot harder and expose them to more challenging ideas and ministry opportunities.”

“You meet people from all sorts of backgrounds… and because of the theological opinions, because of the Christian cultures people come out of, you’re probably getting a more diverse set of those things that you’re having to test yourself on and sharpen your teeth against.”

And it’s rewarding work: knowing that as they finish their apprenticeships, people are going out to do God’s work, and, in God’s strength, do it well: “There are people out there, some of our graduates, whose ministry I’m a huge admirer of, whose ministry I’d happily sit under myself.”

What do apprentices need to consider?

Steve wants those considering ministry apprenticeships to be realistic about what the future might have in store for them, because putting a career on hold to do an apprenticeship can be costly, so they at least need to consider whether they are heading for full-time ministry or not.

He gets prospective apprentices to think through a lot of other things up front, too – what the work and expectations will be like; the rich but demanding variety of tasks, reading and other learning they will be required to do; and the necessity of doing fundraising. He gets prospective apprentices to consider whether they’re prepared to make many calls and patiently follow students up, since there’s always a fair bit of that to be done in student ministry. And he makes sure they understand that they will be expected to make mistakes. It’s part of the learning process.

Steve wants all his apprentices to be blessed in the same way he has been through his decades-long involvement in student ministry; and he wants people to pray for them, and for him.

“Pray for grace and peace and abundance… pray that I would not only teach faithfully, but that I would set a good example, because a significant part of your training and teaching comes through the way you live your life.”

And a particular challenge in student ministry to pray about right now?

“So much of university life is mediated through screens at the moment. So it’s hard enough for our students to be witnesses in the first place, but the lockdowns are just making it that much harder. So you could pray that God would light a fire in their hearts. And that we’d find ways to meaningfully encourage and promote being a witness at university.”