Rob Alley (left) and Ellyn Rowlands (fourth from right in black top) on a trip with Across the Divide.

An MTS apprenticeship is always a wonderful partnership between an apprentice, MTS as an organisation, a local church, and a number of prayerful financial supporters. But sometimes, another organisation comes on board to add even more to the MTS experience.

That’s what happened for Ellyn Rowlands (née Rowe) when she completed her apprentice in 2014-15.

In 2013, Ellyn was attending EV Church on the Central Coast of NSW and working as a preschool teacher, but she was investigating ministry opportunities. She decided to go on a mission taster trip with an organisation called ‘Across the Divide’, run by Rob and Jenni Alley.

Rob and Jenni have been involved running trips for many years on behalf of Australian Indigenous Ministries. Since 2018, this ministry began to function independently as ‘Across the Divide’ and Rob & Jenni joined as members with Pioneers. Across the Divide empowers and helps people to understand what mission is about, and to gain a broader appreciation of the opportunities for ministry in Australia and beyond. They take groups on immersive bus trips to Aboriginal communities to serve, learn and think more.

“We definitely don’t do the trips with the purpose to recruit people to Aboriginal ministry in and of itself, although we certainly have a heart and desire for that. We very much see it as an opportunity to mobilise people for the whole world,” Jenni explains.

The trip certainly inspired Ellyn, who spent many hours on the trip discussing ministry opportunities with Rob and Jenni. In the midst of one of their conversations, Rob and Jenni brought up an idea with Ellyn that they’d had.

“We were part of a church in Newcastle where people ended up doing MTS, which was really good and we could see that it was a good thing, but it tended to funnel those people who were passionate for global mission back into local church ministries. We started investigating what to do about that and we ended up in Ben Pfahlert’s office. He sat down and had a really great conversation with us about what we were thinking,” Jenni explains.

Rob and Jenni realised that Ellyn was the perfect candidate for a new sort of apprenticeship: a partnership between MTS, a local church and Across the Divide.

Things moved quickly from there, and by the beginning of 2014 Ellyn was the first MTS/Across the Divide hybrid apprentice.

Based at EV Church, Ellyn had a designated trainer and was involved in all the normal sorts of ministries for an apprentice – kids and youth, one-to-one meetings, as well as running the church’s mission awareness program. But she also spent several months out of the year on the road with Rob and Jenni, joining with them in their ministry. 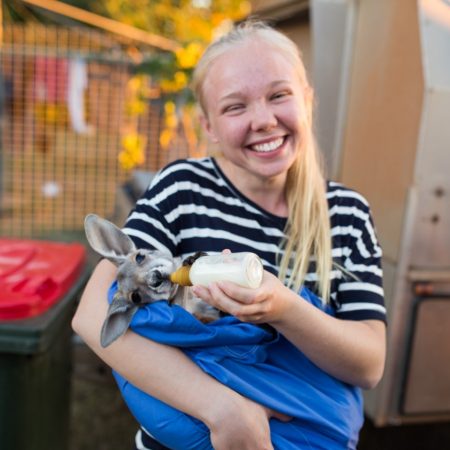 Ellyn enjoys meeting the locals while on a trip in outback Australia.

“I really wanted to explore doing cross-cultural ministry, but I knew I wouldn’t get that at my church,” Ellyn says. “So this partnership was able to give me a wider range of ministry experience through the one program.”

Rob and Jenni were thrilled to have Ellyn working with them for two years, and were delighted to see how she learned and grew.

“As part of it, she came on a bus trip the first year, just as a team member. But the second year, she had to plan the whole thing herself with the idea of that being a way for her to build relationships with missionaries, with Aboriginal churches,” Rob recalls.

“it was exciting to be part of that discipleship process for her,” adds Jenni. “She was a very eager learner and she had a real learning posture with everything she did.”

It was a formative two years for Ellyn. Along with gaining a greater understanding of Aboriginal culture and ministry, she also deepened her appreciation of the diversity of churches and styles of ministry.

“Our church is very well-structured. So I think rather than just only seeing that one perspective of how to do ministry, going out and seeing it in a different context in different churches brought me back to understanding that actually, there is not the one way to do it. This is the gospel and we want to get that out however we can. It can look different in different places. Not every church has to look like EV does! I kept bringing my thinking back to, what is the real point of what we’re doing? What are we trying to achieve? How do we help people grow in the knowledge of God in their context, not just replicating ministry around the country?”

Jenni and Rob agree wholeheartedly. “I think it can be really, really helpful to realize that there’s multiple ways to attack gospel ministry. The building blocks are the same, and that’s why MTS is so fabulous because it gives really good building blocks for training ministry. But having that extra input can be really transformative in quite a big way,” Jenni shares.

Since her apprenticeship, Ellyn has studied at Bible college, married, and is now a mum of two including a newborn. She’s still heavily involved in her local church, still running the mission awareness program and considering where God might have her family serve in the future. “I love thinking about how our church can be supporting our mission partners and seeing people keen for ministry beyond the Central Coast,” she says.

Rob and Jenni also remain grateful for Ellyn’s time with them. “She’s done a great job of facilitating an ongoing relationship between Across the Divide and EV,” Jenni says. “A whole range of people at EV would never have been exposed to cross-cultural ministry without Ellyn,” Rob adds.

MTS has a number of partnerships with Christian organisations, allowing apprentices to gain a greater breadth of ministry experience. Interested in learning more? Get in touch today!