MTS Apprentice Bek Hotchkin grew up going to church in country Pinjarra in Western Australia. Here she became a Christian through the faithful testimony of her Christian parents and their dedication to taking her to church. 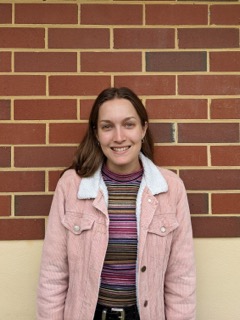 The desire to see Jesus known

When she moved to Perth to study Nursing at Curtin University Bek joined a bible study at St Matthew’s Anglican Church Shenton Park. She says, “That was the first time I had been part of a Bible study group that looks deeply at God’s Word and tries to understand what it has to say. Having been a Christian from a young age and understanding who Jesus was, but never having a lot of experience in understanding what God’s Word has to say, I found that really formative for me.”

Bek graduated from university and started working as a nurse. She married her now husband Ben, also a member at St Matthew’s Anglican Church. It was Ben who first made her curious about getting better equipped for Christian ministry and life. Bek recalls, “Ben was heavily involved in the Christian Union [at UWA University], and I saw how much training he got out of it. Like how to write Bible studies, how to understand God’s Word and evangelistic training too.”

It stood out to her how she felt much less equipped, but was very conscious of how much our world needs Jesus. Bek says, “Particularly in a nursing context, with so much pain and suffering you could see how much people need Jesus. I realized I wanted to be further equipped to be able to share Jesus with others, but also in my own understanding of God’s Word and being able to handle it faithfully.”

The tap on the shoulder for MTS

After working in nursing for three years, Bek came to the end of 2021 thinking about doing something different.

Bek says, “I originally thought about doing some theological study as well as some part-time nursing. But a lady at our church, Rosemary Thorburn tapped me on the shoulder and asked if I’d considered doing an MTS apprenticeship, which I had never had at that point.”

Although she hadn’t considered MTS before, Rosemary encouraged Bek to consider it. Bek shares, “She said theological study is good and helpful, but it sounded like I wanted more practical skills and MTS would be beneficial in developing practical ministry skills. So I think it was a twofold thing – God planted a desire for me to be further equipped and He had people tap me on the shoulder.”

Bek took up the opportunity to be trained at St Matthew’s Anglican under Women’s Minister Eryn-May Wicks. Throughout the week she is involved in a variety of ministries.

Bek attends one of their Women’s Growth Groups on Monday mornings and has been learning a lot from reading the bible with women and mothers from different walks of life. She says, “I value their insight and learning from them, but also being mutually encouraged by the word of God.”

On Tuesday she leads at their Playgroup, doing craft activities, singing songs about God and reading picture books to kids under the age of five.

Wednesday is when all of the MTS apprentices from St Matthew’s come together with the other MTS apprentices throughout Perth, to be trained in writing talks from a passage in the Bible. Bek says, “This semester we are taking turns preaching from passages in Mark’s gospel and receiving feedback from our groups. Writing talks still feels hard and stretches me, so I am thankful for the practice!”

At various times throughout the week Bek meets up with women to read the bible, and she also coordinates music for the Unichurch congregation. She shares, “Choosing songs for the Sunday service and supporting the music team leaders and members in leading Unichurchers in praise of our mighty God is a real privilege.”

Bek is also doing some study at Trinity Theological College alongside her apprenticeship, which has been helping her grow in knowledge alongside her practical ministry skills. Last semester she completed the Introduction to Biblical Theology unit.

Encouragements and challenges through MTS

Through her apprenticeship so far, Bek has been personally struck by the need to depend on God. She says, “Whether it’s writing a bible study, a youth group talk or a playtime program, I need to ask God for his help, for understanding of his Word, and to not strive by my own efforts. I’m learning to submit my weakness to God and depend on him in humbleness, and through prayer ask our good God for his help through his Word and the working of his Holy Spirit.”

God has already been working through Bek and her fellow apprentices in their work. Recently Bek and fellow apprentice Lindsey, ran a Christianity Explored course for 3 non-Christian friends of members of the Unichurch service who were wanting to investigate Jesus. Over 4 sessions they looked at the gospel of Mark to see who Jesus says he is and his call for us to respond to him in repentance and faith.

Since doing that course one participant has given her life to Christ, and now reads the bible each week with Bek. Bek shares, “It’s been such a joy for me to see her hunger to know Jesus more and more, and to understand God’s word.”